Public perceptions of the timing and effectiveness of the government's COVID-19 lockdown measures have been clearly splot for some time. In early March, before the restrictions were imposed, liberal newspapers were running editorials calling for lockdown. In recent weeks, an increasing amount of evidence has come to light to suggest that lockdown was imposed too late - accounting for the UK's comparitively high infection and mortality rates. This is while there is clear concern that the current easing of lockdown is too early.

New polling from Ipsos MORI reveals the sharp public divides on this. In a recent poll, taken after the announcement of the relaxation but before the measures were actually lifted, shows that a pluraity of people believe that the lockdown should have been imposed earlier - and that it is being relaxed too quickly (accounting for 48%). Another 11% believe that the original measures were introduced too soon or at the right time, but are now worried they are being relaxed too quickly.

12% believe that the government chose the right time for both the March imposition of lockdown and the start of relaxation in July.  Another 18% think the original restrictions were imposed too late, but that it is either the right time to relax them or that they are being relaxed too slowly.  A small minority (4%) have consistently believed that the origional restrictions imposed too quickly or were correct but should now be relaxed more quickly.

Overall, 69% now think that the original lockdown in March 23rd was imposed too late. At the start of lockdown, 56% thought the measures were being taken too late, and 35% at the right time.

People aged betweek 45-64 (42% of this group are that age), and who voted Labour in the 2019 General Election or Remain in the 2016 EU referendum (45% and 50% of this group respectively), are most likely to believe that lockdown should have been imposed earlier and should last longer. Those who believe that the origional measures were introduced at the right time or too soon but are now concerned that they are being relaxed too quickly are most likely to be older (39% are aged 55 to 75), slightly more likey to be female than male (by 53% to 46%), and six in ten live in the Midlands and South of England. Half (52%) of this group voted Conservative in 2019.

People who believe that the government got lockdown right throughout the process are the most middle group in the poll (36% are in social class AB), with relatively high proportions of 25-34 year olds (29%) and of parents (34%). Six in ten of this group voted Conservative in the 2019 election and Leave in the 2016 referendum.

Those who believe that the lockdown started too late but should be relaxed are also slightly younger (39% are aged 18-34), and slightly more male than female (by 54% to 45%).  They also have a slightly higher proportion of 2019 Conservative voters (45%). 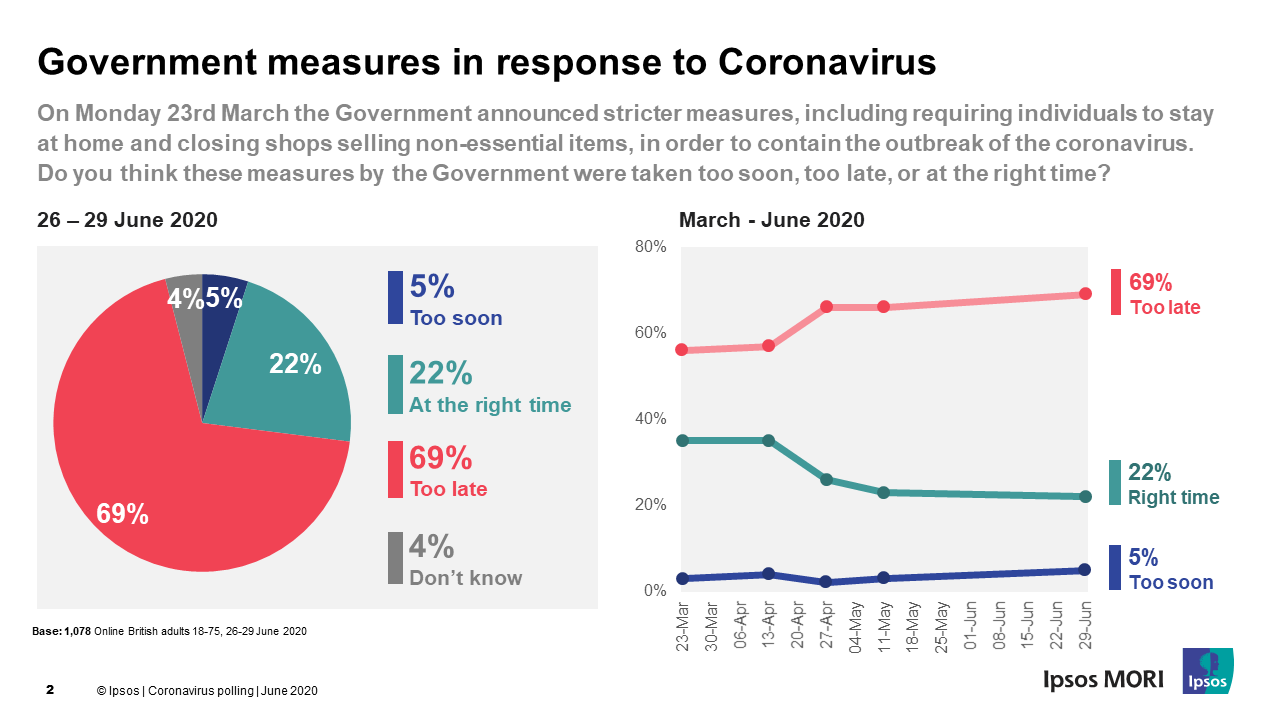 Graph and data via Ipsos MORI

These findings confirm our other research that, overall, Britons tend to err on the side of caution when it comes to the lockdown measures.  But it also shows that these views aren’t static.  Even though the real number of cases has fallen, perceptions have hardened that the original measures were imposed too late, underpinned by a clear partisan divide.

Nevertheless, even with the benefit of hindsight, not everyone takes the same line for both the March restrictions and the July relaxation.  Some want to keep the restrictions in place for longer, but others are ready for them to be relaxed, even if they felt they were originally introduced too late, and there is also a minority who think the government has always picked the right time.  This all suggests that despite views hardening the public hasn’t yet come to a final view, with the impact of the relaxation this weekend likely to be key in determining whether the Government is seen as leading public opinion or moving before it was ready.